Unsympathetic male characters have never been a great draw for me. Making them intelligent, stupid, anarchic, suburban, idiosyncratic, neurotic, eccentric, romantic – it never really makes a difference. I didn’t know it when I first read The Catcher in the Rye, but my reaction to that book, to Holden Caulfield, was an indicator of things to come.

If unsympathetic male leads can have a saving grace, it’s that they’re surrounded by characters in whom, and embedded in a plot in which, you can become invested in your protagonist’s stead – that, or they’re so brilliantly three-dimensional that their flaws are more engrossing than tiresome. Jonathan Franzen’s Freedom is my favourite recent example of the latter. 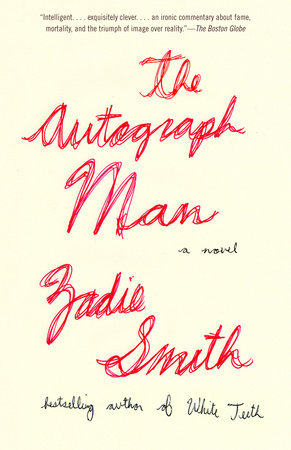 Smith’s protagonist in The Autograph Man (2002), Alex-Li Tandem, isn’t unsympathetic, exactly, but he has a self-interested moral compass and a noticeably superficial worldview. His profession (sourcing, collecting and selling autographs), and not his forever girlfriend (who we do not meet until the book is mostly over), is his rather starved-seeming life.

As a concept, the “autograph man” as central character could just as easily be a cheap draw as a fascinating one, but just as unsympathetic male protagonists bother me, so too do quirks for the sake of quirkiness. It is not enough that the six-foot-ten Irish migrant is a sky-writer, he must also stand to learn something from it.

So, combine that character, the amoral young man, with his autograph obsession, and then combine that with Smith’s prose: a hyper-real, theatrical-cum-lite philosophical take on the characters who inhabit the streets, pubs, synagogues and auction rooms of twenty-first century London. I was not far into The Autograph Man before I began to feel that whimsy, indulgence, colour and curiosity were being used to draw me along, at the expense of depth and resonance, and perhaps even honesty.

That all, plainly, sells Smith very, very short. She is a tremendous writer with a robust, vivid imagination, and this was only her second book, published when she was twenty-seven. But there is a lot of clear overreaching: a midget rabbi, a dying autograph purist, a philosophising milkman. It’s too much, a bright, jumbled mosaic.

But to return to Alex, I don’t know why I’m put off so especially by unlikable young men. I may not want them to be true, or I may recognise myself, or I may (at my most naive) like to think they don’t exist. Often I wonder why people do nice things for them – like love them, sleep with them, care about their fortunes.

And it was especially so in Alex-Li Tandem’s case that I wondered why the novel’s two young female characters (who are both beautiful and intelligent – and not much developed beyond that) were loving and sleeping with him, respectively. He seemed quite charmless, even wallpaper-like, so really, why? For his part, he barely spends a second in the novel contemplating them. His thoughts are on autographs.

As for the plot, Smith does not seem to find her first full morsel of depth in the world of autographs until the three-hundredth page, in a withered ex-star of Hollywood. Unfortunately, revealingly, it serves to highlight the puerility of Tandem, with whom we spent pages one through two-hundred and ninety-nine.

Even when making those films, even as a know-nothing girl, she had slept badly on the suspicion of just how many of these people, these movie-goers, take a line, take a look and use it on a loved one.

I checked myself a number of times whilst reading The Autograph Man to see if I’d taken any prejudice in with me – I thought Smith’s debut, White Teeth, was excellent, but it did have a kind of hyper-reality I found off-putting. But I read White Teeth many years ago, and my feelings about it hadn’t carried over. I went into The Autograph Man with open arms.

Writing off writers is something I used to do all too flippantly, and I’m glad The Autograph Man was recommended to me. If Smith has grown as a writer, which reviews for The Embassy of Cambodia and On Beauty indicate is the case, then I’ll keep reading. So if something else comes out of this year of not reading works by men, maybe this will be it: writers surviving a less than perfect book. Because I’m twenty-six, and at this rate I don’t expect to have written anything genuinely good until my thirties are a distant memory.